X
This site uses cookies to provide and improve your shopping experience. If you want to benefit from this improved service, please opt-in.
More Info
Accept Cookies
we are available: 7 days a week from 9am - 6.30pm
Call Us On: 01564 775522
authorised uk distributor of koso & daytona 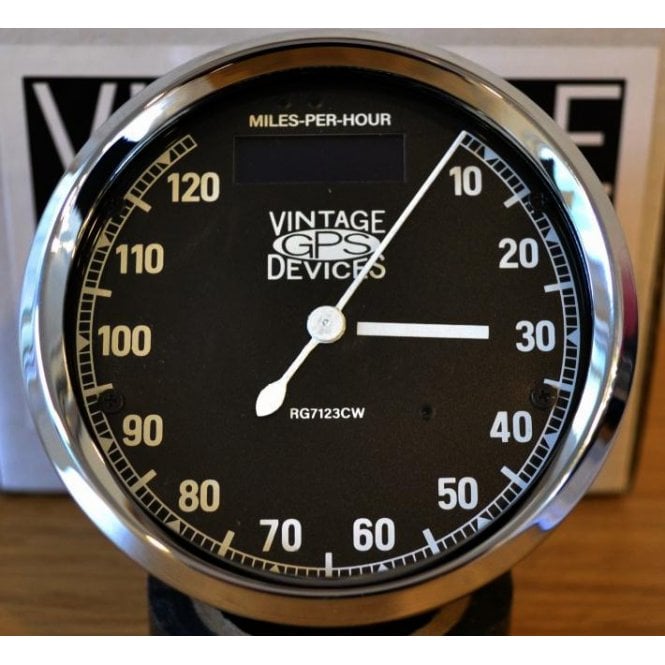 Code:
Item in Stock Item out of Stock | Usually dispatched within 24 hours
Loading...

New product from Vintage GPS Devices, features the looks of the early sixties chronometric dial but is unique in that it is completely self contained, it features an internal GPS speed sensor, one of the fastest around, and an internal rechargeable Li Po battery.

GPS uses a fast 10hz chip and acquires the necessary sattelites in 20 seconds indicated by a yellow flashing light, when the light goes off its ready to go.

Battery charge is 2 hours from Empty to full, Blue Led indicator tells you when battery is fuly charged

Designed to provide a totally independent accurate indication of speed and distance travelled.

Visually similar in appearance to a period Chronometric speedometer.

Supplied with a Black case and a chromed bezel.

Fully auto charging. Red LED is displayed while charging.  Blue LED is on when fully charged.

Nominal charge rate of 500 mA to give 2hr charge time.

A fully charged battery will provide up to 15Hrs operation before automatically shutting down to protect against over-discharge  of the Li-Po battery.

(It is acceptable to charge the battery whilst using the unit)

Trip may be reset to 0000.0 on power up via the toggle switch

Each unit is individually hand built in the United Kingdom.

Internally Powered by a 1500 mA/Hr Li-Po battery, charged with an in-built battery charger.

Latching On/Off switch.  Carries out a self-test on power on.

GPS battery backed up when off for rapid satellite acquisition on restart.

We use Royal Mail for all shipments except for the specific FedEx service offered to international customers.

Every effort will be made to dispatched the goods as soon as possible after your order has been accepted. However, we will not be liable for any loss or damage suffered by you through any reasonable or unavoidable delay in delivery. In this case, we may inform you of the delay and the reason for the delay as soon as is practical.

Royal Mail 24 Hour tracked is not a guaranteed service as noted in Royal Mail's terms and conditions we do not except any liability for shipments that take longer than one working day to be delivered. We cannot open an investigation with Royal Mail until after 1 week of the posted date.

Royal Mail 48 Hour tracked is not a guaranteed service as noted in Royal Mail's terms and conditions we do not except any liability for shipments that take longer than two working day to be delivered. We cannot open an investigation with Royal Mail until after 1 week of the posted date.

Free postage is only offered on UK 48 hour postage, not any of the other services we provide.

Goods which prove unsuitable may be returned for refund, credit or exchange if they are returned to ourselves within 14 days of receipt. Subject to the following conditions:

-  We cannot accept responsibility for returned parcels which are undelivered, please retain your proof of postage etc. You may require it in the event of a claim with your carrier.

-  Restocking fee of 10% might be applied to all returned goods that are not deemed faulty.

no nasty surprises after you've spent some time shopping! Payment is due at the point of ordering, and can be by

details are protected by the SAGEPAY approved Java encryption system.  Details are not held in clear text on any website,

and only decrypted after reaching our computer.  If you prefer not to send your card details in this way, please call us.  All

items show the current stock situation, however in the unlikely event of an item showing as in stock when ordered, but is not available your card/Paypal account will be refunded. Your Paypal or credit card statement/receipt will be in the name of Vmaxbitz.com Ltd, Paypal email will be jon@vmaxbitz.com